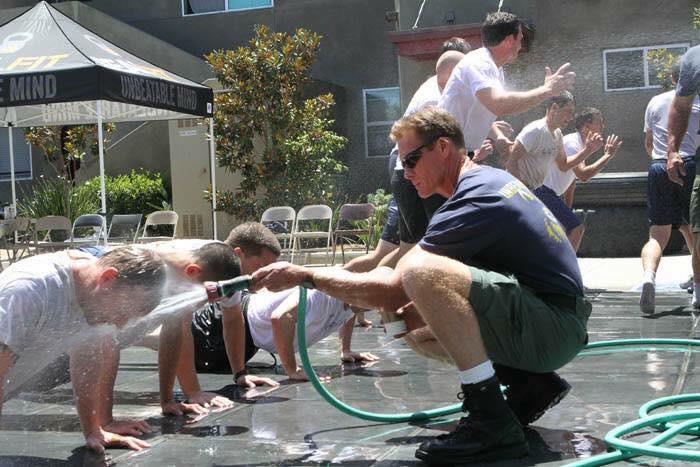 A warm up run was followed by completing a Sealfit Operator WOD (Workout of the Day) and then finding our 1 repetition maximum Military Press.

We then had a session with Coach Will on “Warrior Breathing” or Qi Gong.

Hard fast breathing in and out through the nose…….lucky I was lying down.

Immediately after the breathing session, I felt light headed and all these different emotions ran through my head. I felt like crying….one of the boys actually was….Coach Divine explained that this is normal and generally there will be several people in the class crying after this breathing session.

Wow! That was very powerful. Something I had not experienced before.

We then did “Warrior Yoga” in the heat again.

We ate, then had a functional fitness session with sledgehammer hits, tyre flipping & the rower. All fine by me.

This was followed by a long time in the sun, working on barbell complexes.

This training was right up my alley and I enjoyed it but it was repetitive and energy sapping.

My hand blisters also had some new friends……

Then, an introduction to hand to hand combat, using body rolls and engaging your opposition. A big day!

Overall my body held up well. It was tired but all was good.

I had enjoyed the training but it was draining, so when it was time to eat, the lads and I were loading up on chicken, fish, eggs, vegies and salad. The food was all Paleo and delicious.

I was starting to suss out my team mates too.2 were from the US Army, 1 from the US Airforce and we had the Italian National Judo coach with us.

Everyone except the Italian and I, had ambitions to join the Navy Seals, so any competitive sessions were going to be eagerly fought out.

I was also sussing out the stronger leaders in the group…..and there were quite a few.

The coaches had started to set us leadership roles during the day too and we were being watched very closely……..

They had also introduced the hose to us….the hose was put on you, to make you lose focus. If you did…you copped it even more.It does not sound like much..a hose with water…how hard can that make things?

Well, when it is shoved in your mouth and you have water bubbling up your nose and trying to breath, while keeping in step with the team, your focus tends to wane.

I later learnt that the hose was to “re-hydrate” us. So, I tried to gulp the water down as much as possible.